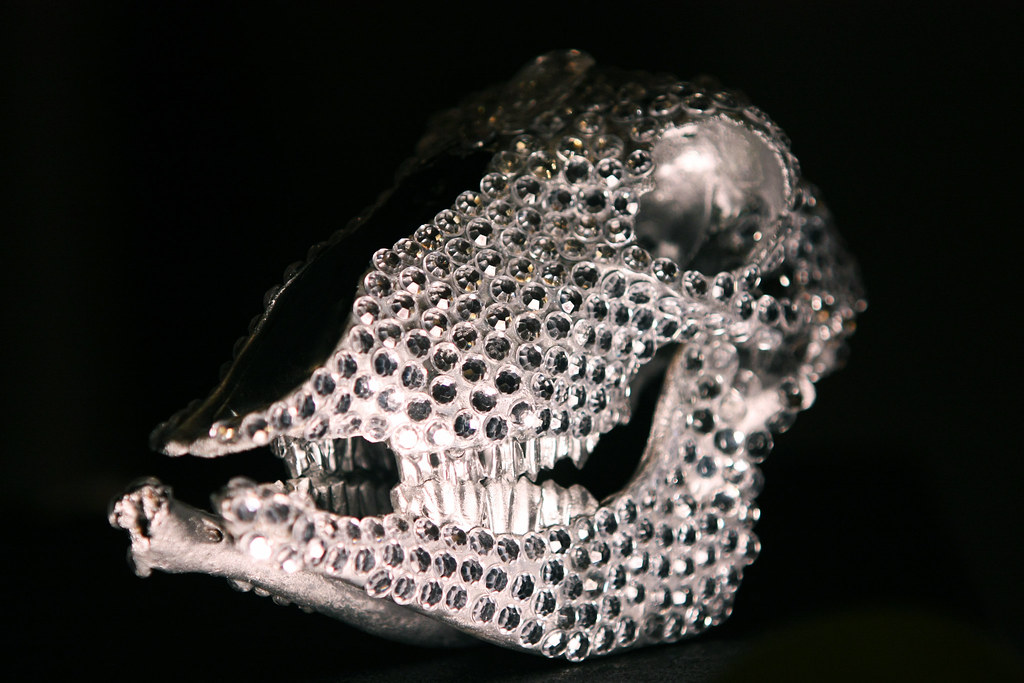 What with the election happening in a month I made a website to help educate us all on Republican Presidential nominee John McCain.

Most people are familiar with the Ten Commandments. You know the story: Moses, tablets, Mount Sinai, etc. Well, throughout the Torah (that's the Jewish Bible, also known somewhat pejoratively, as the Old Testament or Pentateuch) there are actually a lot more Commandments listed. Christians, for a variety of reasons, ignore most of the rest of these Commandments, although they seem to think some of the ones that pertain to sex are of particular importance and should still be enforced (homosexual sodomy bad!). But since us Jewish folk haven't had our Jesus come along yet and make himself the new covenant, those people who are more observantly Jewish tend to follow every single one of the Commandments. The standard counting is that there are 613 of them in the Torah. Everything from "Learn Torah" to "Not to wear 'Shaatnez', a cloth woven of wool and linen". Personally, I happen to love a good wool/linen blend. By the way, the Hebrew word for Commandment is Mitzvah, so Bar/Bat Mitzvah means Son/Daughter of the Commandments, and marks the point in time when Jewish children are supposed to be responsible for following these rules, whether or not you have a party and read a little Torah to commemorate that particular moment in time. [And I should probably eventually write something up about why I had a bar mitzvah two years ago since I had technically already been responsible for keeping the mitzvot (plural of mitzvah) for the previous 8 years anyway.]

Currently, a number of these 613 Mitzvot are no longer applicable, and no one, not even the Jewiest Jews still follow them. Many of these anachronistic Mitzvot have to do with our Temple procedures. The Temple used to to be the central part of Jewish ritual, but after it got destroyed the second time, Judaism switched from a Big T Temple religion to a Little T temple (read synagogue) religion, and we stopped following all the Mitzvah related to the Temple. There are also some Mitzvah that apply only to Israel, only to specific people, such as the Priestly class, known previously as a Kohain. (A lot of people with the last name Cohen are descendants of this line of Priests and are sometimes called on to play a special role during Jewish religious services). There is a particularly interesting dispute about a Mitzvot regarding locusts. The Torah goes into some lengths about which food is permissible to eat (kosher). And it mentions that there are a couple of locusts that are okay to eat. But since most people stopped eating locusts for a long time, they forgot which kinds are kosher, and since they can't tell the acceptable ones from the unacceptable ones they couldn't eat any of them. Except for the Yemenites. The Jewish folks in Yemen have been eating locusts since the time of the Torah, and they claim to know which are the God-approved ones. This dispute eventually reached the head rabbinic authorities (as you can tell, after 3,000 years of arguing, we've dealt with all the really important questions already), and they ruled that a food is kosher if there is a continuous tradition of treating it as kosher within a particular culture, so the Yemenites can keep eating their locusts, but no one else is allowed to.

Aside from all the Mitzvah that no longer apply, there are also a bunch that I disagree with (for a variety of reasons). So I went through the list of all 613, identified the ones that I liked and laid them out in a way to represent my own personal blend of Judaism. I'm not going to list the ones I picked here, and I made some of them purposefully illegible in the painting, but if you're reading this and you're Jewish, I'd encourage you to look through the list and see which ones you like. And if you're not Jewish but you want to do good in the eyes of Judaism, we came up with some rules for all you gentiles to follow. They are called the Noahide Laws or Seven Laws of Noah and you can read them here. 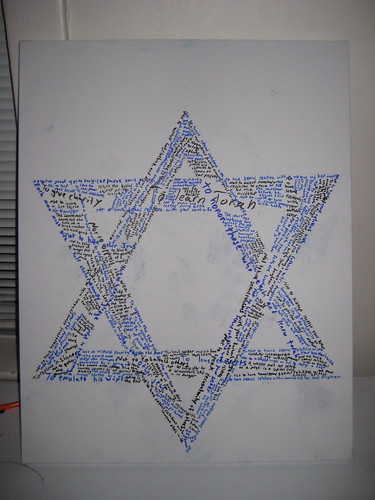 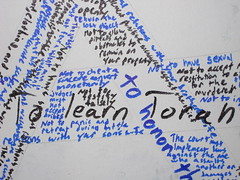 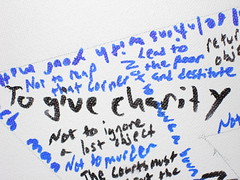 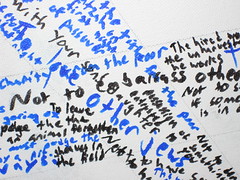 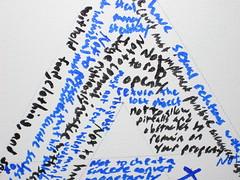 I've got some other Mitzvah related ideas that I'll be working on soon. Plus, I've been neglecting my menorahs, so I'll be finishing some more of those soon.

I've actually been meaning to do this particular piece for some time, and I had held off on actually pulling the trigger for a variety of (mostly bad) reasons, so if I get around to it, I'll write something up about my artistic process, why I eventually completed this, and what I learned from making this.

I made some Jew art.

I wrote the Dvar Torah (literally, words of Torah) for the Hillel newsletter this week. This week's section is about the the trek to Mount Sinai and culminates with God delivering the Commandments to Moses. You can read the whole thing here, and I've included an excerpt below:

Finally, we see in this portion the importance of the Torah to the Jewish people. Previously, Moses has served as the leader of the Jews as they escaped Egypt and wandered in the desert. Moses is a tzadik among his generation, and he received assistance from God in overcoming the obstacles he faces. Finally, in Yitro, Moses appoints others to serve as judges alongside him, choosing people who do not have this personal relationship with God. Although at first it seems like they would not be as wise or fair as Moses, promptly after these judges are appointed, Moses goes up Mount Sinai to receive the Commandments from God. The link between these Jews being appointed as Judges and receiving the Commandments from God shows that all the wisdom these leaders need to help adjudicate matters correctly can be found in the Torah. Today, when we might not have direct instructions from the Lord on how best to handle problems that arise, we still have the Torah, which was used then as a substitute for God's wisdom in helping the new Jewish leaders serve the Jewish people.

Not to mention, last week apparently no one wrote a Dvar Torah for the newsletter, so they ran the one from last year, which happened to be the one I wrote. So if you want to see what I thought about Beshalach, which is about the escape from Egypt, some wandering in the desert, and then Moses leading the Jews in a battle against Amalek. You can read the whole thing here.

After some reflection and conversations with some friends about Mormon missionaries, I wrote something about my thoughts on the matter. It's rather long, but I posted it on Myspace, so you can read it there if you want. You don't need an account to read it, but you should friend me if you're on there.

Apparently two Mormon missionaries stopped by while I was napping today, and my parents sent them away without harassing them first. They were girl missionaries, which I didn't realize existed.

I would have really enjoyed the chance to talk with them and inquire about their special underwear, find out whether they have baptized any of my relatives that died in the Holocaust, and what I can do to help vanquish Lord Xenu from the earth.

Do they have Mormon missionaries in St. Louis?

I spent last July at a Jewish summer camp in Southern California, learning with some very amazing and talented teachers about Judaism and arts and identity and spirituality and a lot of other stuff. It was a life-altering experience, and my recent artistic pursuits are owed entirely to that experience. I did a lot of writing and performing and dancing and photographing, so I wanted to share that with all of you.
( Collapse )

Here are some videos from my recent trip to Chicago with my friends Steve and Brian.

At the Funeral Museum in Springfield Illinois:


About 45 minutes outside of Chicago: 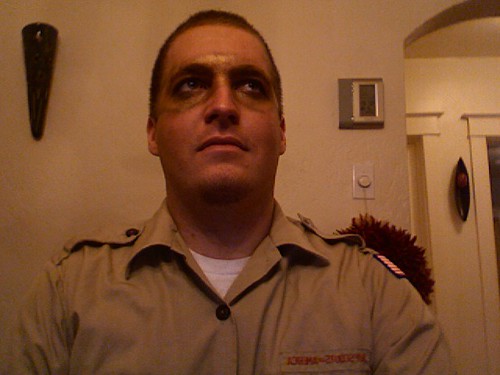 Super powers include:
*the ability to pitch a tent in the blink of an eye
*I can start a fire with just two big sticks

Special thank you to Ben for doing my make-up. [The gold around my eyes had diamonds in it. Diamonds!]
Collapse